TOSprint or not to sprint?

Report of a week of sprint

First of all I want to warmfully thank the sponsors, especially Olivier Courtin from Oslandia for the organization, and Mozilla France for hosting us.

Once a year a bunch of hackers from projects under OsGeo umbrella, meet in a face to face sprint.
This year it happenned in Paris with great number of participants (52).

There was globally five big groups, and if each community was running its own schedule,
there was a lot of cross echanges too.

My main objective, except being enough luckly to be a sponsor, was to go there and be in direct contact with upstream.

This can help a lot to improve packages, and create new ones.

Moreover, as one of my openSUSE’s Application:Geo peer maintainer, Angelos Kalkas was also participating, we decided to make somes changes, and improve the situation of the repository.

We were using a Staging repository to test the global changes to minimize the breakage on the main repo, kinda à la Factory 😉

Let’s talk about what you will get once the rebuild will finished:
* gdal goes to 2.0.2 which is big jump since version 1.11

* postgis got upgrade to 2.2.1 with sfcgal as dependency so 3D operations are avalaible.

A big thanks to Paul Ramsey for his help resolving the issues raised. Especially the advise to stick to -j1 during compilation of postgis 🙂

* PDAL pdal.io (with libght) is a point cloud abstraction layer which is under active development and should
in the future replace libLAS once the compatible C interface will be written.
A big thanks to Howard Butler, for helping to get all packaging issues resolved.

* Mapserver : mapserver.org
During the week, mapserver team made impressive changes:
– First by closing numerous github issues which didn’t get updates for a long time.
They run a bot script which automatically close the github issue, and users get a nice message about it.
Perhaps it could inspire us, on how we write closing ticket in bugtriage. 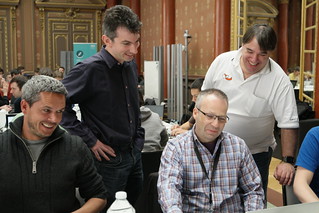 – Part of the team took the challenge to update all the tutorial material.
– A number of question about the future of mapscript : lacking maintenance resources (humans and or funding)
– Bugfix release on thursday night. 6.4.3 and 7.0.1

For openSUSE, I’ve been discussing a lot with Thomas Bonfort.
The idea would be to be able to propose at least two or more versions that receive security and bug fixes. Actually the 6.4 and the 7.0 branches.
This will allow people to smoothly upgrade their map files, when there’s breakage or adaptation needed.

I classify this request as a good idea, and started analyzing what we can do. So its actually a work in progress.

There’s nothing more enthusiastic (for me) than participating to a FLOSS event. If some days are more frustrating than others, the others serve to build this free world we all need.
So I would like to ping your attention : all FLOSS software and communities need your contribution . If you’re using one of them, become interested in how it is built, organized, start to learn today how to contribute, and enjoy your journey.

There’s more to come, especially on the mapserver side, and more and more packages.
Stay tuned!

One Response to “TOSprint or not to sprint?”