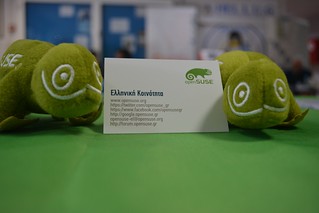 The Conference started early on Saturday morning welcoming the participants and with the key note. Various presentations about open source software, hardware constructions and some workshops took place. Presentations such as Raspberry Pi arcade, openstack, OSGeo, ownCloud, Bitcoin and many more were quite interested by the visitors. 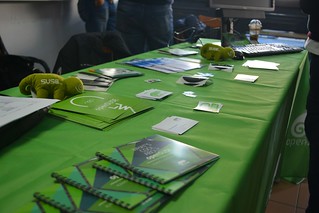 Greek openSUSE community was there with a booth and some presentations. On Saturday Alex P. Natsios presented “Enlightment on openSUSE”, an alternative GUI, and the other presentation was about “openQA”. Since openSUSE Leap 42.1 was very fresh, Alexandros Vennos took the opportunity to present what are openSUSE Leap 42.1 and Tumbleweed, the differences and what to install on what occasions. Presentation had title “openSUSE – Leaping Ahead”. 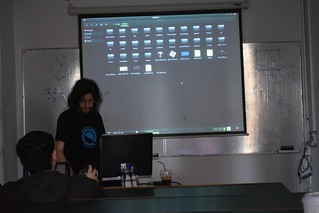 The booth was quite crowded. We had some left over DVDs of 13.2 but we proposed the visitors to install Leap 42.1. The question we were asked most was what is the difference between openSUSE Leap and Tubleweed and why to install and on what ocasion. We even created couple of bootable USBs from the ISOs of Leap. We had a Banana Pi running Tumbleweed with MATE playing a video loop of openSUSE Leap 42.1 KDE review. We gave almost all of our promo materials to the visitors since they were interested on openSUSE. 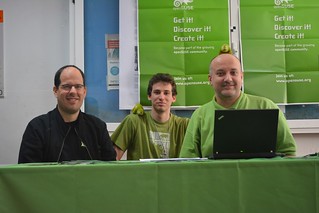 another way to access a cloud VM’s VNC console

If you have used a cloud, that was based on OpenStack, you will have seen the dashboard including a web-based VNC access using noVNC + WebSockets.
However, it was not possible to access this VNC directly (e.g. with my favourite gvncviewer from the gtk-vnc-tools package), because the actual compute nodes are hidden and accessing them would circumvent authentication, too.

I want this for the option to add an OpenStack-backend to openQA, my OS-autotesting framework, which emulates a user by using a few primitives: grabbing screenshots and typing keys (can be done through VNC), powering up a machine(=nova boot), inserting/ejecting an installation medium (=nova volume-attach / volume-detach).

To allow for this, I wrote a small perl script, that translates a TCP-connection into a WebSocket-connection.
It is installed like this
git clone https://github.com/bmwiedemann/connectionproxy.git
sudo /sbin/OneClickInstallUI http://multiymp.zq1.de/perl-Protocol-WebSocket?base=http://download.opensuse.org/repositories/devel:languages:perl

I hope this neat code will be useful for other people and tasks as well and wish you a lot of fun with it.