Magic: It is now possible to use MS Silverlight based websites via pipelight

It has long been a challenge to use MS Silverlight based websites on linux systems. Especially in The Netherlands this is a big hurdle as many (>80%) of the secondary school websites that pupils must use to communicate with their school (for homework, marks, etc) are equipped with Silverlight. Yes, really… 🙁

Fortunately at the end of August 2013 I discovered pipelight, a very smart idea to use MS Silverlight based website natively on Linux. The problem was however to find a working pipelight package for openSUSE. As there was none, I decided to build one myself using the incredible openSUSE Build Service. It was quite a quest to obtain a working package, but due to very good cooperation with the pipelight developers, I’m now able to present a working pipelight package to the openSUSE community. Oh, and while working on the package I reported a bug via the bug report system, that was solved and published via an rpm package within 1 hour after reporting it (that was during out of office hours). Indeed within 1 hour after reporting the problem it was; accepted, investigated, analysed, fixed, tested, handed over to me, packaged, tested and published! The amazing world of Open Source Software!

Pipelight works okay for the following sites (among many others): arte, LOVEFiLM, Netflix, Magister based NL schoolwebsites, WATCHEVER, etc. View the complete list on the pipelight website.

As Christian Boltz and myself held a quite successful talk on Wine on the 2010 openSUSE conference, we decided to again hold a talk at Germanys largest Linux fair, Linux Tag 2011 in Berlin.

We again ran the pun talk “Wine” (not) the Emulator vs “Wine” the beverage, with Christian talking about life and work at a vineyard and his wine grower community at Deutsches Weintor.

Included in this talk was a Wine tasting of 4 different kinds of Wine, as grown in the area were Christian lives.

His stories on Vineyard activities and the processing from grape to wine interluded with myself talking about Wine the Emulator, its historical and statistical parts, game support and futures.

Around 70 people  enjoyed our light hearted wrap up talk of this Linux Tag conference. 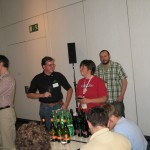 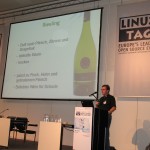 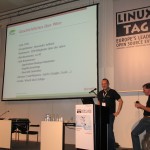 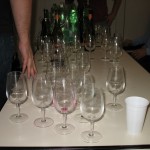 As I guess everyone notice, Google has released their own Browser called Chrome. Based on Webkit (based on KHTML of KDE fame) it is a small, fast and foremost secure webbrowser. And if you are reading this, you likely know that it does not work on Linux, but only on Windows.

This also explains the first comment from a colleague on Wednesday morning was: “Why don’t you have fixed Wine to run it yet?!?” We tried together to get the online installer to run, but not successful.

Over night however some other folks found out how to do it by using the offline installer.

So how to install Chrome:

Its available via the Community Repositories Module in YAST2 on openSUSE 10.3 and 11.0,
after adding this repository upgrade the wine package.

This piece of code run as root will do it on openSUSE 11.0:
zypper sa http://download.opensuse.org/repositories/Emulators:/Wine/openSUSE_11.0/ Wine
zypper in wine

All other steps are done as desktop user from a regular shell.

While Wine contains richedit libraries they are not yet up to the task to help Chrome yet.
(This is likely to be fixed soon.)

This will popup a dialog where you can press return until Chrome itself starts.

Since we need to supply Chrome with some Options to make it work with current Wine, you need
to close it again. Click anyway any crash messageboxes.

We need to supply Chrome with some additional commandline options to make it run with Wine,
so we need to do start it by hand (instead of clicking on the convenient Desktop Icon already there).

And of course the obligatory screenshot: Most of the funny workarounds above will actually vanish in the next Wine releases, now that the Wine developers can actively debug it.

The WineHQ Application database entry has the ongoing discussion of getting it to work and links to the Wine bugzilla entries.