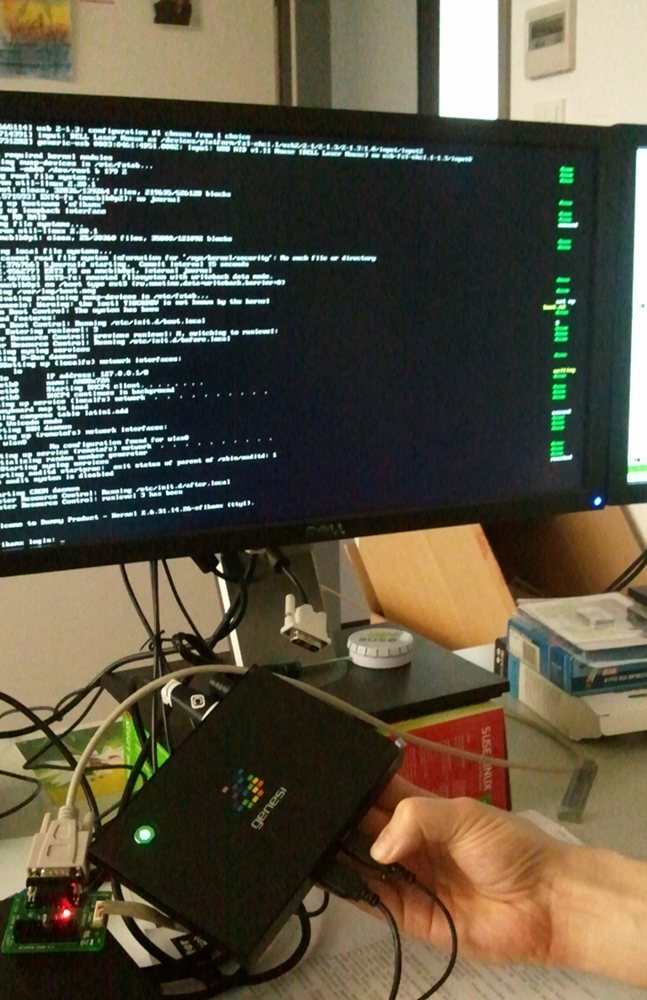 This week I finally got my genesi efika MX box. By default it has on old Ubuntu version installed on its internal IDE-attached 8GB SSD. It features 512 MB RAM and a 800 MHz ARMv7 CPU.

Using a HDMI-cable and an HDMI-DVI-Adaptor I got it connected to a monitor, plugged in a USB keyboard+mouse and it pretty much worked out of the box with WLAN,Ethernet,X11 (except for a bug that causes it to force you to change PW on every console login). How boring.

Having read about recent progress with openSUSE on ARM I wanted the excitement of running it on this box.

Michal’s image and script (now in alpha) was very helpful to get me started within 15 minutes.

If you have any (e.g. x86) openSUSE system running, there is another easy way to create a working ARM chroot-environment:

If it worked well, /var/tmp/build-root/ should contain a chroot environment. E.g. you can run

I partitioned my SD-card into two partitions. The first one for /boot with ext2 (needs only 150MB) and the second one for / to contain the rootfs. Be sure to have barrier=0 in your fstab for all ext[34] partitions so that writing to SD will not be as slow. The default U-Boot configuration first checks on the first partition of an SD-card for boot.scr which is a uImage-formatted version of a U-boot script. I copied all of Ubuntu’s /boot and /lib/modules/, slightly adapted their boot.script file to have root=/dev/mmcblk0p2 and uImage/uInitrd-2.6.31.14.26-efikamx as kernel/initrd, dropped “quiet splash” and added “console=ttymxc0,115200” to see more of the boot and ran a line from another helpful site:

However, this failed to boot. Using the serial debug console, I could see U-boot trying to load the boot.scr but it was thinking it was zero bytes for some strange reason. Re-creating my /boot partition as a raw copy of /dev/sda1 with my adaptions ontop finally gave me an SD-card that just boots openSUSE Factory on ARM with framebuffer console on HDMI/DVI.

« fuk the kit you will love
openSUSE ARM image »

2 Responses to “running openSUSE on ARM”